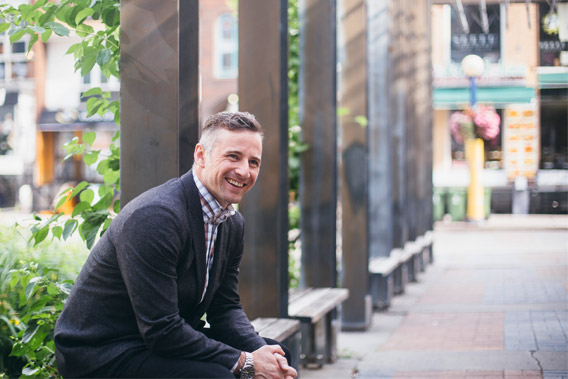 It was 2013 and the conflict in South Sudan had just erupted. Ian was on lockdown in his one-bedroom civilian apartment, trapped inside for nearly a week as war waged on the streets below.

“The nights were sleepless,” he remembers. “The peak of the fighting and looting was happening after dark. After day six the rebels were pushed out of the capital, which allowed my team to begin evacuating non-essential foreign aid workers from the country. There were thousands of people waiting to get to safety.”

This was Ian’s reality for close to four years in his role as Field Operations Manager for Voyager Airways, a privately owned aviation company that has contracts with the United Nations and World Food Program. Ian refers to his previous job—which involved providing personnel movement for UN dignitaries, soldiers, staff, and local government officials across the Middle East and Africa—as akin to Uber for the UN.

“I worked in a problem-solving and logistical capacity,” he explains. “Negotiating contracts, managing operations, and liaising between executives at the United Nations and World Food Program. I moved to six different countries in Africa, living in each for about three to six months at a time, and spent a year in Afghanistan as well. For some missions I was posted at the UN headquarters and for some I was living in a mud hut community in the middle of the Congo.”

While Ian’s days with Voyager Airways are now long behind him, his current job as Director of Sales for EF Educational Tours in EF’s Toronto office resonates in a similarly meaningful way.

“When I decided it was time to come home, I aimed to find an organization that embraced making a difference in the world,” he says. “My relevant experiences were so obscure I wasn’t sure how they were going to translate to the next great thing. I worked with a career counselor to try and map it out, but I wasn’t making a passionate connection to anything.”

Enter EF Education First. Ian had heard about EF through a former colleague and after learning more about the company’s core values, he knew it was “the next great thing” he’d been looking for. He was hired as a Travel Manager for EF Educational Tours in 2016, but as he grew in the role ultimately gravitated toward sales, where he now works as a director overseeing four Canadian provinces and managing a team of 10 people.

When asked what he loves most about his job, Ian talks about the opportunity to make an impact on young people’s lives.

“Our division works with teachers to send students across the world, to learn about new cultures and grow beyond their wildest dreams, so that’s the first point of impact,” he says. “But as a sales director, we also hire a young workforce. Most of my team are fresh out of university. It’s exciting to work with these individuals who are in a key time of developing skills they’ll carry with them throughout their careers. And I get to be part of that!”

And looking back on his own cultural and travel experiences, Ian feels nothing but gratitude.

“You have to embrace that we are very fortunate to have access to the things that we do,” he says. “There’s no better way to experience life than to see how other cultures live.”