Growing EF China from the ground up: Lynn’s EF journey 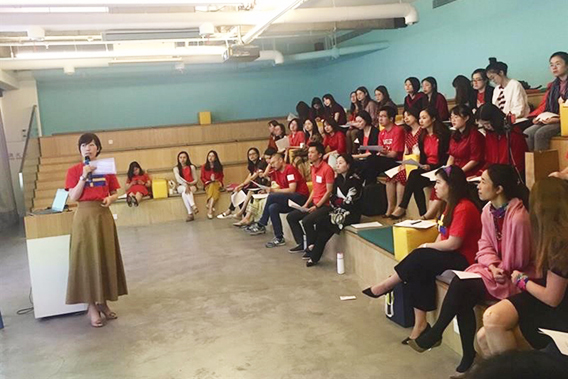 When Angela was asked to describe Lynn, her friend and coworker of 12 years, the Executive Vice President of EF China didn’t skip a beat:

“Lynn is as smooth as water, as strong as water and as warm as the morning sun,” says Angela. “She is a treasure…a true book of EF China history.”

Lynn, who got her start with EF Education First in 1999 and now works as the Director of Recruitment and Employee Development in EF’s Shanghai office, is EF’s first employee in China to reach the 20-year mark with the company. And it’s clear how easily Lynn lives up to her reputation.

“Everyone has their strengths and everyone has their difficulties,” Lynn responds humbly to Angela’s description of her. “I’m not loud, but believe people are influenced best when they feel my respect and care. It’s easy to live up to those characteristics when you work with fantastic colleagues and at a company like EF.”

At the time of Lynn’s hire more than two decades ago, EF’s presence in China consisted of a sole EF English First school in Shanghai and a staff of fewer than 20 employees.

“The company wanted to expand their schools across China,” Lynn explains. “As the assistant to the President, I performed various tasks to aid in this goal including operational support, sales, teacher recruitment, marketing and even working as a cashier. The team was small. We were willing to do whatever the company needed to grow smoothly.”

In the first two years, Lynn and her team opened up 10 schools across China. At their five-year mark, they had opened up more than 50 schools. Today, there are 300 EF English First schools throughout the country. As she was helping to grow EF English First, Lynn also found her passion: recruiting and employee development.

“After a few years, my responsibilities shifted toward teacher recruitment,” she recalls. “We had more schools and the needs of our teachers were critical to how they operated the business. I found that I was quite interested in communicating with people and realized that I wanted to focus on recruitment full-time.”

In 2004, Lynn decided to pursue her master’s degree in human resource management from Renmin University, taking courses on the weekends while continuing to work full time for EF. At this point, her previous recruiting experiences, her studies and her working relationship with Angela came full circle.

“We worked closely and built up a lot of trust in one another in those years,” says Lynn.

In 2006, Angela was tapped to build out recruiting and employee development for EF in China and Lynn was the first person she asked to be on her team.

“It was just the two of us,” says Lynn. “Angela was a real role model for me. She taught me what EF culture is all about.”

Lynn says it was only after working with Angela that she really understood why she loves EF so much.

“After I joined the [recruiting and employee development] team, I realized the reason [I love working at EF is] the people that we employ,” says Lynn. “EF knows how to hire. When we interview, we look for ownership, killer instincts, quick decision making and risk taking. We recruit people that are passionate about language, culture and travel, but we also recruit people that are passionate about their own lives and hobbies. An EF employee is dynamic.”

For Lynn, this means spending quality time with her husband and daughter outside work, as well as tending to her garden (her favorite flowers are hydrangeas), attending art exhibitions and concerts, and going out with friends. And as she celebrates her 20-year EF anniversary, it doesn’t look like she’s slowing down any time soon.

“I look back over the last two decades and it brings up a lot of emotions,” says Lynn. “After all, EF has been nearly half of my life. But, I’m still very excited about the future. You’re never plateauing here—there’s always room to grow. Twenty years is not the end.”