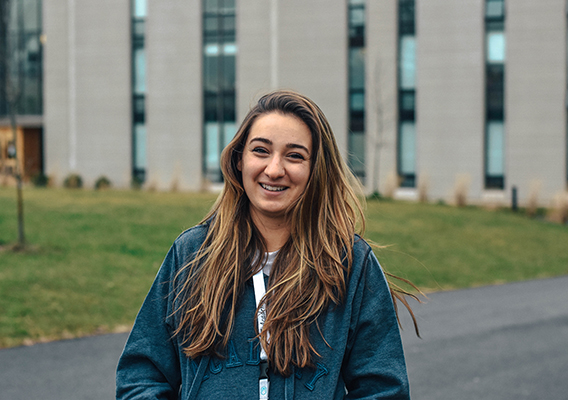 Six months after graduating from college, Emily was babysitting for a former professor who asked Emily to sit down for a chat. “She said, ‘I love you, but you need to get a real job,’” Emily recalled, laughing. Emily missed campus life, but she didn’t know what to do next. She chose to babysit full-time until she figured it out—or, in this case, until her professor gave her a push in the right direction.

“I was really involved with student life when I was in school, so I knew I wanted to be back on a campus,” Emily said, after her professor prompted Emily to focus on what she enjoyed most. Emily was in luck: another one of Emily’s former professors happened to know the headmaster at a boarding school in New York.

That school was EF Academy New York, an international boarding school for high school students hailing from 75 countries. Emily’s interview was tough, and she was forewarned that the job would be difficult. “Brian, our headmaster, gave me some great advice when I interviewed,” she said.  “He told me, ‘this job is not going to be easy. I’m going to throw you in the deep end and you’re going to sink or swim. If you use your resources around you, we’ll teach you how to swim and we’ll give you your life jacket.’”

To some, this might have been an intimidating start, but Emily found it inspiring. “I loved the challenge of it,” she said. “It sounded like a once-in-a-lifetime opportunity for me.” Emily got the job and became the Activities Director at EF Academy New York. As she was the very first person in that role on the New York campus (EF Academy has two additional campuses in the United Kingdom), it was up to her to create and grow the program.

“I had no idea what I was doing, but I figured it out!” she said of her first weeks as Activities Director. “I loved the culture of learning, failing—and failing fast—and bouncing back. I look at the difference between where I was three years ago and where I am now, and I’ve grown so much. I manage a lot of responsibility, and I never would have had this opportunity at another school or company.”

As an Activities Director, Emily is, in her words, “in charge of everything that’s fun on campus.” “I’m in charge of student clubs, on-campus activities that students want to do, like fundraising or competitions, and the educational trips that are requested by teachers,” she described. In addition to school clubs and on-campus activities, EF Academy hosts off-campus trips every Friday and Saturday for students and teachers to explore New York City. “I’m here to say ‘yes’ to kids, to help them achieve their goals,” Emily said.

Emily is also a resource for students when they are stressed out from finals or just need a reminder to relax and have fun. “My job is about supporting them and giving them outlets for self-care and fun when they need it. For example, during finals week, I worked with the guidance counselors and nursing staff to hold events like hot chocolate and cookie decorating, ornaments and cupcake decorating—fun little ‘brain breaks’ to take their mind off things.”

But what Emily loves planning most is the annual Culture Fair, which she says is always the biggest day on campus. “We turn every room in our academic building into a country,” she explained. “It’s all student-led. They take charge and select a president for their room. They spend all day and night decorating on Thursday, then Friday we open it up to the town. Other schools come and visit, there’s a craft and photo booth, and students dress up in native celebration outfits.”

This year, EF Academy featured 30 countries at the Culture Fair, just a fraction of the nationalities represented on campus. At first, working with such an international group of students came as a bit of a culture shock to Emily. Hailing from a suburban neighborhood in New York, it took Emily a while to truly understand the perspectives of her many international students. “For example, I didn’t know that Brazilian students who would hug and kiss me on both cheeks were just showing their appreciation and affection,” she said. “It took me a while to learn all the differences and cultural norms—with a few embarrassing mistakes in between!”

Emily said that exposure to her students’ cultures has inspired her to travel more and better see the world through her students’ eyes. “I didn’t travel a lot before I started at EF Academy,” she said. “I did a two-week tour to Europe in college, but I thought it was more about the people I was with, not the places I was going. Now, talking to these students, I want to see the things that they’re talking about, eat the food they’re talking about, experience what they’re telling me about.”

Emily doesn’t plan on slowing down anytime soon: this past trimester, EF Academy had 47 clubs, and according to her, the sky’s the limit. “I’ve never rejected a club application,” she said. “Who am I to crush their dreams? I’m totally about it! If their club ends up being really successful throughout the school year, I’ll pair them up with a teacher. Then it becomes a teacher-student club that counts toward the Creative, Activity, and Service (CAS) part of the International Baccalaureate (IB) program.”

So while her days are just as challenging as the headmaster initially warned her, Emily will tell you that it’s worth every moment. “I love my job,” she gushed. “It’s so unique, but I feel like I was meant to be here and do this.”