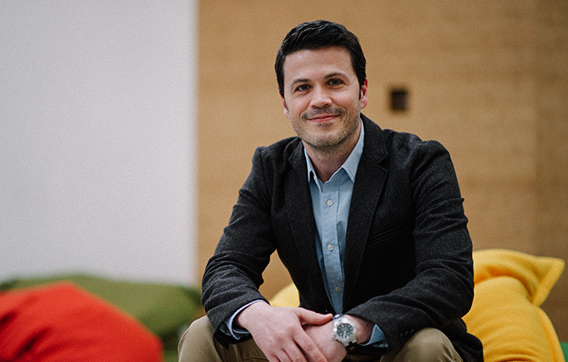 When Wil left his home in Canada on a backpacking trip after finishing his undergraduate degree, it was with the goal of traveling the world and exploring different cultures. He didn’t plan on turning his gap year into a 20+ year career in education, more than a dozen of which would be spent working at EF Education First. He also never expected to find himself a student throughout much of that time. But this is exactly where Wil’s path has taken him.

From his early days as a young student in a French immersion program, through his first job as an ESL teacher in Thailand, to his current role as Vice President of Learning Design & Strategy with EdTech in EF’s Shanghai office, Wil’s career as both educator and student have spanned multiple countries and taken him through various roles under the umbrella of language and education.

We recently caught up with Wil to discuss his career, how his long history of being both student and educator has led to his success, and the things that have been important for him as he’s built his career.

How did you get started working in education?

I stumbled into education. I did not go to university imagining that I would be a career educator. I was taking a break between degrees and decided I wanted to do some traveling. And at one point, I decided I wanted to stay where I was in Thailand, so I started teaching English, as many people do, and I realized I liked it.

I had a great time teaching the Thai kids. And I was working in a supportive setting, so I had great colleagues. I was lucky to have a supportive headteacher and a great trainer herself. Working with really skilled colleagues led me to want to also seek more training.

As my career developed, while I’ve always been in education, I’ve gone through several phases that have changed my perspective and changed my day-to-day. But I’m glad that I spent a lot of time in the classroom when I first started because that’s the perspective that I’ve carried through all the other stages of my career.

You’re a career educator, but also a lifelong student. What impact has that had on the work that you do?

Growing up in Canada, I was in a French immersion program, so I grew up speaking two languages. Originally it was an interest in language and culture that drew me in. But as I learned more about teaching, I felt I had no idea what I was doing. And if I was going to keep doing it, I didn’t want to be pretending. I didn’t want to be faking it. I wanted to learn how to do it properly. As I started receiving training and learning about it, I realized I had a lot to learn, so I kept learning. I like being a student, and I do think it’s an important perspective to have. It gives you first-hand experiences to apply on the other side of things when dealing with students yourself.

But people often come into an organization like EF, and they feel like there’s a black box associated with learning, or often it’s called “academics.” So, they’ll think, “I don’t understand academics.” I would suggest that people try to blow that idea up and think about it in smaller pieces. Everyone who’s been a student understands what it’s like to learn something.

What has helped you be successful at EF?

When I started teaching, I did not imagine the career that I’ve had. The role that I have now didn’t exist when I first joined EF, so it’s been a result of seeing things that I could do, developing skills, and finding opportunities.

At EF, I’ve never been in a position where I felt like I couldn’t ask about something, or get involved in something, or where people would say, “look, mind your own business.” That never happens. It’s a people business, so when you take advantage of that and get to know more people, whether at work or socially, you learn more about what they’re doing, and you naturally learn about ways that you can collaborate.

When I think about the people who have been successful in this company, that’s one thing that they’ve had in common: their ability to work cross-functionally with a variety of people. When approaching a problem, they can think systematically and think about it from the customer’s perspective. They say, “What is the kind of experience or the kind of service I want to provide?” And then, “Well, I need this person’s help, and that person’s help, and to bring these things together.”

In a big company, there’s always the risk of getting stuck in silos and seeing things with blinders on. The reality for our customers is that they don’t see those functions. They think about the experience.

Beyond working and thinking collaboratively, what else has helped you?

Early on in my career with EF, I worked in an EF franchise school in China as a Director of Studies. I went well beyond the scope of what a Director of Studies would be, but it’s the people who enjoy being involved and can see something that needs to be done and go and do it who are successful.

understanding and awareness through working with salespeople. I even helped to refurbish and paint the school. I felt a lot of ownership for the school. When things needed to be done, I wanted them to be done as best they could be.

As a manager in a school, there are a lot of things to figure out. I had less time to explore the challenges I was facing, which was hard for me because I like to take my time to analyze and think. But I needed to learn how to be decisive because a lot of people were relying on those decisions. And let’s just say I made a few mistakes. But importantly, I learned from them, and the experience was formative in my career. 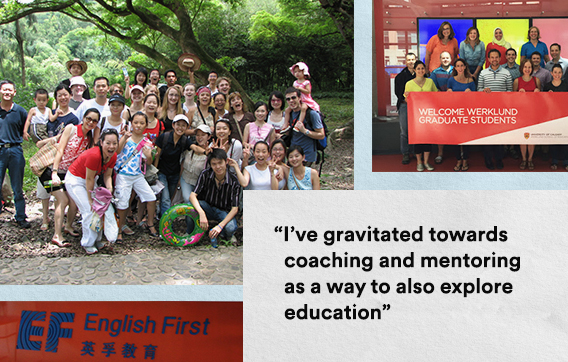 Has being comfortable making mistakes been an essential part of your career growth?

One of the things that’s given me confidence over the years is being comfortable enough when I have an idea to say, “I don’t know if it’s going to work,” and having a process for iterating and testing and developing. It’s important to have an idea and try something, instead of waiting until you have a perfect idea before doing it. That’s a shift in my mindset that’s taken place over the past ten years or so from not wanting to make mistakes to taking calculated risks and learning from those. The fresh faces –– who otherwise might challenge the way things are –– are sometimes quite young, so they’re not ready to push back and make mistakes. If you can create spaces in small groups or a one-to-one setting where they can share their opinion without fear of losing face, they might be more inclined to take risks and share ideas that are not quite fully-formed.  Who knows, a fresh idea might evolve into something great!

As you’ve moved beyond a teaching role, how have you stayed connected to what first got you hooked on working in education: the teacher/student relationship?

I’ve gravitated towards coaching and mentoring as a way to explore education, and it’s a nice avenue for developing meaningful relationships. It’s a very satisfying feeling for a teacher to see students doing well, and when you’re a coach or mentor, and you see your staff or your colleagues doing well, you get a similar type of positive feeling.

Want to be a lifelong educator? Visit careers.ef.com

Jess is a Boston-based traveler and writer who's previously lived and worked in New Zealand, Copenhagen and Paris. Her adventures have brought her to more than 30 countries, and the first spot she seeks out when exploring a new place is the nearest local [...]