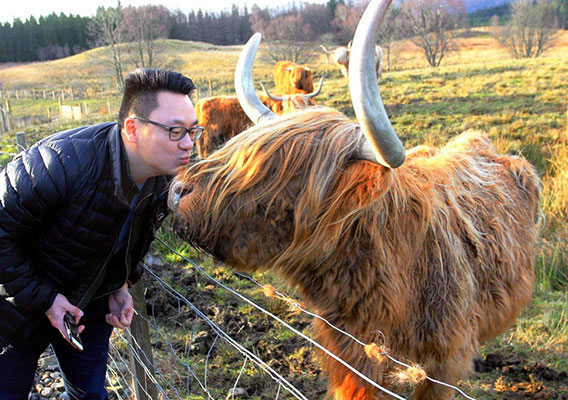 When you meet Jeremy, you might be surprised to learn he started his career in financial services. It seems like a far cry from his current role as Manager of Customer Service, and it is—Jeremy will be the first to tell you that he hated finance. “I had gone against what I was passionate about,” he explained.

Once Jeremy realized he had to escape the finance world, he found himself talking to a family friend at Thanksgiving dinner, all the way back in 2008. “I have no idea what product she worked for or what she did at EF Education First,” Jeremy said. “All I can remember is how much she loved where she worked, how the culture at EF was so amazing.”

It took a while, but eventually Jeremy decided to apply to EF Educational Tours. He wasn’t quite sure what he was looking for, but he was hired for a seasonal role in customer service at EF’s Boston office. Turns out, the job was the perfect fit.

“I’ll never forget when my manager brought me into a room, about five months after I started working there,” Jeremy said. “I don’t really remember what I said during that conversation, but I do remember saying something along the lines of ‘I really, really, really want to stay here!’”

Jeremy was offered a full-time position a few days later, and has spent the last few years handling a variety of customer service needs, from pre-tour questions to assisting with flight itineraries. It was during this time he took his very first trip abroad, where he explored the best of Italy. “It was an unbelievable experience,” Jeremy said.

Over time, Jeremy’s hard work continued to be noticed, which is how he landed his current job at EF, helping manage his team of 26. “Developing people is the most rewarding part of the job for me,” Jeremy said. “I have been lucky enough to see many staff members over the years grow into creative and dynamic people. They gain confidence, learn skills and, frankly, teach me a thing or two.”

But Jeremy’s influence doesn’t just stop at career development—over the years, he’s turned his passion for fitness into an EF phenomenon, leading EF’ers all over the building to dub his workouts “Bodies by Bomba.”

“It started with a laptop, a speaker, and three of us in the park, working out to a video.” Jeremy explained. “I’m super passionate about working out, because I think it’s crazy important to have some physical movement throughout the day.” Word about the group spread, and Jeremy now hosts a weekly class in the EF1 fitness center.

Even though Jeremy’s class packs in near 30 people a session, he didn’t quite realize how big it had become until he was in Botswana, traveling with a group of 20 teachers from around the country. “One of my colleagues walked out of the bus wearing this t-shirt that said ‘Bodies by Bomba,’ and I was like, ‘where did you get that?’” Jeremy laughed. “I had no idea they were made!”

It turns out that a fellow colleague had ordered shirts for the office as a surprise. Now, lots of his colleagues can be found sporting the t-shirts when traveling the world with EF. “It’s pretty cool,” Jeremy admitted.

And while Jeremy acknowledges it’s fun to have t-shirts with his namesake, he’s continued to make his mark at EF for the very reason that brought him there: the culture.

“I just knew that the culture was different than anywhere else,” he said. “That’s what everyone kept saying. The people they hire here make it easy to build that culture.”

Interested in opening the world with us? Visit careers.ef.com.