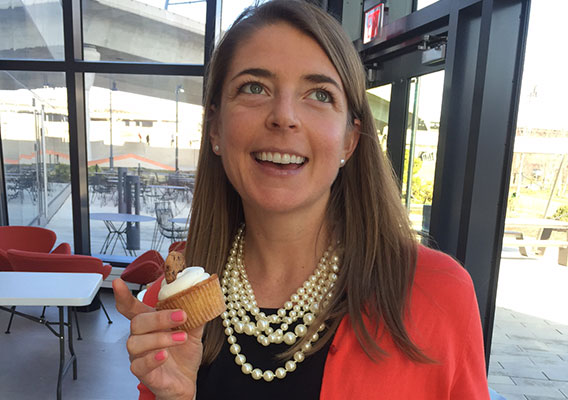 Three years into her career at EF Education First, Jenni didn’t realize that registering for the 2012 New York City Marathon would not only be a pivotal moment in her personal life, but her professional life as well. After signing up, she realized that she needed to start fundraising and panicked at the thought of having to ask people for money. It was in this moment that the idea to bring cupcakes to the office, along with a donation jar, came to be.

“I wouldn’t call myself a baker,” Jenni explained. “My aunt had a bakery and growing up we’d spend time together in the kitchen, but beyond that it was just a hobby.” She sent a simple email to a few of her Boston colleagues letting them know she had brought in cupcakes if they were interested. Word quickly spread and week after week, she found her desk surrounded by colleagues from different floors and products asking for the next batch. Her initial idea of selling a few dozen cupcakes to make a small dent in her fundraising goal turned into something much bigger. Soon, she found herself having in-depth conversations with peers she hadn’t met before about why they were running a particular race and asking how she could get involved.

“(EF) people are always running for something,” said Jenni. Whether it be a marathon, triathlon or an Ironman, there’s hardly a time when someone at EF isn’t training. Fast forward to today, and Jenni has officially earned her nickname as the “cupcake lady,” donating her time and ingredients to making hundreds of cupcakes in support of her colleagues’ fundraising goals.

Surpassing her own fundraising goal paled in comparison to the amount of opportunities that Cupcakes for Charity opened her up to here in the office. The once shy Tour Consultant was now collaborating and networking with people throughout the building as a result of her cupcake fame, and her fearless attitude quickly stood out. “Before being the ‘cupcake lady,’ I struggled to establish my presence at EF,” she said. “Since then, I’m proud to say I’ve said ‘yes’ to so many new things that have led to several new experiences.”

Jenni’s confidence, combined with her newfound network, paved the way for her current role as Manager of Customized Tours for EF Educational Tours. Jenni now manages a team of seven customized itinerary specialists who work with teachers to create the perfect tour for their students by modifying existing itineraries, aligning travels with their curriculum, or even designing a tour from scratch.

Our core values are part of the culture at EF—they’re not things you talk about, they’re things you do every day—and Jenni is one of many who sets the standard for what it means to put these core values into action. Ten EF years later, she’s had the opportunity to work across three different products and surround herself with peers that are passionate about the work they are doing every . But the sweetest thing of all? Jenni’s ability to support her peers—in and out of the office—by fueling her own passion for baking.

Interested in opening the world with us? Visit careers.ef.com.

A California native, turned Bostonian, Courtney has a passion for bringing people together through events. A self-proclaimed coffee connoisseur, you can find her flying around the world in search of the next best café. When she isn’t planning an event, or [...]