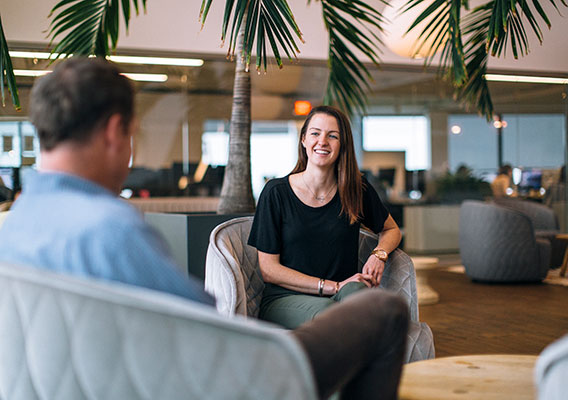 As a Tour Consultant for EF Explore America, Sheila creates new ways to get middle school students traveling on tours throughout the U.S. It’s no surprise that on her walk to the office, Sheila often listens to one of her favorite podcasts, “Pivot,” which is about embracing change—something that EF Education First encourages. It’s what initially drew Sheila to EF in 2015.

Sheila’s journey to EF began in college, where she attended St. Lawrence and worked in the study abroad office. She saw the impact that global education made on students and decided to enroll in a program to Costa Rica. She remembers the experience as intense, but says that she grew in ways she never expected. Sheila decided that when she graduated she would find others who shared her interest in global education.

“I immediately read EF’s mission and that’s what drew me in,” she explained. “I hadn’t imagined myself in a sales role, but understanding what we actually do, our mission—that was most important. For me, the career came second.”

Her initial role as a Sales Associate for EF Explore America required flexibility and adaptability. “From the start there was an entrepreneurial spirit that EF fosters,” Sheila said. It was an environment she thrived in, soon progressing into a Tour Consultant role, working to better understand her customers, test different strategies to meet their needs, and see for herself what worked best.

That entrepreneurial spirit also inspired Sheila to launch an initiative for employee engagement and professional development in the form of a staff dinner series. The dinners rotate between hosts, with each holding an off-campus evening event for 10 guests. Sheila is in charge of setting up the hosts, dates, and guests, while hosts choose the venue. “People love learning from each other and developing new perspectives,” Sheila said.  “It’s also a lot of fun!”

The series has created increased networking and communication opportunities, something she has valued from the start of her EF career. Recalling how she pitched the idea to stakeholders made her smile.

“I was literally shaking when I delivered this idea to the entire EF Explore America team,” she said. Now, the dinner series is in its fourth season. “I’m thrilled that these dinners are able to flow organically and take a life of their own,” Sheila said. “There are few things more satisfying than creating something and watching others benefit as it blooms and changes over time.”

Sheila will soon start a new role as a Project Manager with EF Ultimate Break, which offers group travel for the curious and adventurous, ages 18-29. She says she is most looking forward to working with the people and projects that require her entrepreneurial spirit to increase efficiencies across departments.

As Sheila prepares to hand over her dinner series to someone else, she is excited that the program will live on and looks forward to the connections she will make in her new role. “I know I can exceed beyond what I thought I had in me, and it’s definitely because of the people here that have motivated me.”