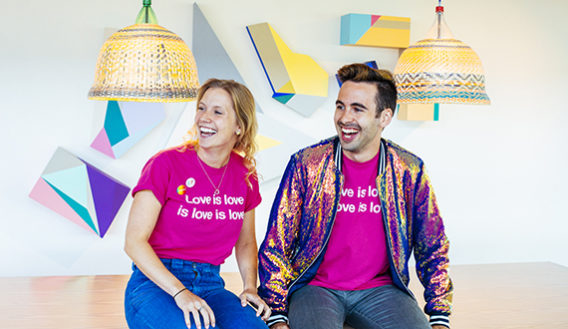 When he first started at EF Education First five years ago, Pete felt he was holding himself back. “I remember feeling really insecure,” he says of his first day. “I thought I couldn’t be my authentic self for a few months.” Over time, Pete’s confidence in his role and comfortability with his colleagues allowed him to start opening up. “I thought, if no one’s going to speak up, I felt that it was my time to speak out,” Pete says.

Flash forward to today, and Pete has not only been promoted to Director of Sales for EF Educational Tours, but he’s also the face of EF’s involvement in the Boston Pride Parade. “I love looking at my own team now, of which I have several queer staff,” he says. “They’re thriving, they’re involved with Pride now—it’s come full circle.”

The idea to participate in Boston’s Pride Parade came two years ago when Pete was having lunch with a colleague. “We were just catching up over work and life when I tossed out the idea of EF being in the Pride Parade,” he says. “I thought it was really important that we start bringing our queer work community together and strengthen it. The Boston Pride Parade seemed like the perfect opportunity where we could show why we think it’s important to support the LGBTQ community as a company, and to support our staff and colleagues no matter their belief, background, orientation, or gender.”

Pete got the go-ahead to move forward, and when he found out two parade marshalls were needed to organize the group, he immediately brought in his colleague Ali to help lead the charge. Pete and Ali met as Tour Consultants for EF Educational Tours four-and-a-half years earlier, when they happened to sit next to each other. “We’d both be singing to ourselves and sometimes singing together,” Pete says. “And Ali’s a great whistler, but that’s my biggest pet peeve ever,” he laughs. “I guess that’s how we got to be friends!”

Ali says that it’s been a great experience to work with Pete on the Boston Pride Parade. “It’s been so seamless and easy,” she says. “With the experience Pete and I have being on the same team, we know how to share responsibility. That’s what has made this so incredibly enjoyable for us. We both love that now it’s part of our EF culture and will continue to be.”

Pete says that the experience at Boston’s Pride Parade is something magical to behold. “It’s one big dance party in celebration of the human experience and raising awareness for the LGBTQ community,” Pete says. “There’s no fitting a mold, if you want to wear heels and dress in drag or walk and wave your pride flag with a group of individuals you support, there’s no one right way to do that. It’s the coming together of all queer people and celebrating the love—there’s no other day in the year like it.”

But what makes Pete and Ali most proud of the event is the positive reaction from staff. “For me, it’s great to see how many more people are raising their hands and wanting to get involved,” Ali says. “Even after last year, seeing the amount of people who went out of their way to thank us for organizing it, it’s been really telling that this is something staff have been craving.”

Pete shares that an EF employee working in the New York office reached out and asked if he could drive down to Boston in order to join the event—to which Pete emphatically said, ‘of course!’

“It means so much to be able to do that,” he says. “It’s getting bigger and better every year. Now we’re having a Pride-themed disco lunch hosted by a successful director who’s gay, we’re having a Pride party in Lingo after work—I never thought that it would become so big. I don’t know how to describe the feeling, seeing how many people want to get involved and who feel they’re being recognized for who they are.”

“It feels really good,” Ali echoes. “To be able to work for a company that’s involved like this, it only gets better and better with the excitement. We’re now really celebrating this community.”

She continues. “We’re so appreciative of everyone who participated last year, all the new people who participated this year, and the EF family. Especially this year, we were so thankful to have Ally, Internal Communications & Event Specialist, on the planning committee. EF’s participation in the Boston Pride Parade is now becoming tradition, and it’s really, really exciting.”