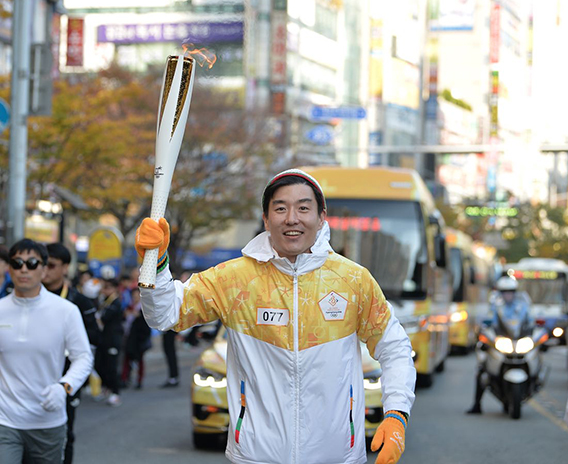 In the days leading up to the PyeongChang 2018 Winter Olympics, Sunuk felt an overwhelming sense of pride. It was the pinnacle of what he’d been working toward since he started at EF Education First six years prior.

Sunuk’s career at EF began in 2012. When his long-time friend Seonjoo told him about the new company she was working for, he was intrigued. Sunuk had been working in the finance industry in roles far different from what Seonjoo told him of EF, but he was willing to listen.

“She told me all about EF,” Sunuk recalls. “And one thing she said that really stood out was that this company had both flexibility and resources.” In Sunuk’s experience, it was common for a company to either be flexible, or have resources—but it was rare to find both. “Seonjoo was so passionate about EF,” Sunuk said. “She convinced me to change jobs, change industries, and try something totally new.”

Sunuk’s first job at EF was as a University Development Manager  in Korea. “It wasn’t easy in the beginning,” he admits. “It was a different industry for me, and everything was different from the jobs I had before.” With a lot of competition on the market, Sunuk and his team had to find ways to reach customers and make EF stand out.

But the hard work was worth it. In just three months, Sunuk became a Country Program Manager , overseeing EF Language and academic programs as well. Sunuk learned everything he could from studying other successful regions, and relied heavily on his team for support. “I kept asking, and our sales managers kept sharing,” he recalled. “Everyone was very supportive, and they helped me settle down in the industry and taught me a lot of skills.”

Working with his team, Sunuk began to truly believe that nothing was impossible, one of EF’s seven core values. “Every single moment was interesting and fun,” he says. “I wasn’t working alone, I was working with Seonjoo and the rest of the team, sharing our knowledge with each other and finding the best strategy to approach customers. When your colleagues are also friends, it helps you all achieve more.”

As the Country Manager for EF Education First Korea, Sunuk and his team have been working even harder to build awareness for EF as the Official Education Services Sponsor for the PyeongChang Games. “The Olympics is an event for everyone all over the world, and EF is here to open the world too. Seeing EF at the Olympics is a sense of pride for the whole team that is incomparable to anything else.”

Sunuk was selected as one of five EF staff to carry the Olympic torch during the relay leading up to the games. As he was running, he kept thinking about the core value that nothing is impossible.