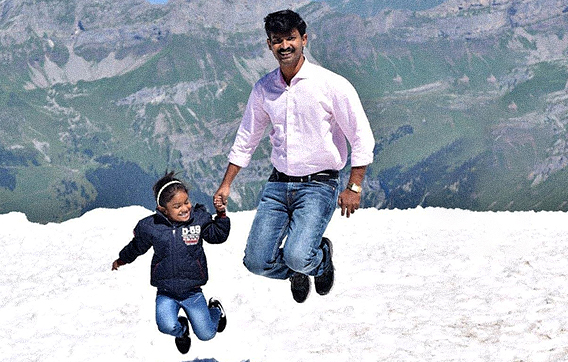 If someone presented you with a life script that was stable and traditional — a near guarantee of respectable success and a strong shot at a good life, would you take it?

This was the situation Prajin found himself in during the global financial collapse of 2008.

With eight years invested in his career in web development, Prajin was hungry for change. Success in Bangalore, “the Silicon Valley of India,” was all about working for well-known multinational organizations. It was a safe path with many perks, not least of which was social approval. Mention your position and employer to friends or family in Bangalore, and there was no question that you’d “made it.”

But there came a point when it just didn’t work for Prajin anymore. At work, his tasks were clear, but his greater purpose became increasingly abstract.

So, when Prajin found himself with three job offers in hand, two from well-known multinationals that signaled stability and one from EF Education First, a newcomer in Bangalore, he was at a crossroads.

One direction offered him another chapter of the same safe yet unsatisfying career path. The other direction promised a jolt to his way of working, an environment where he could create, innovate, and contribute toward inspiring, tangible outcomes.

We recently sat down with Prajin to learn about his decision to join EF, his thoughts on finding a work culture that works for you, and his unexpected path from Bangalore to Zurich. 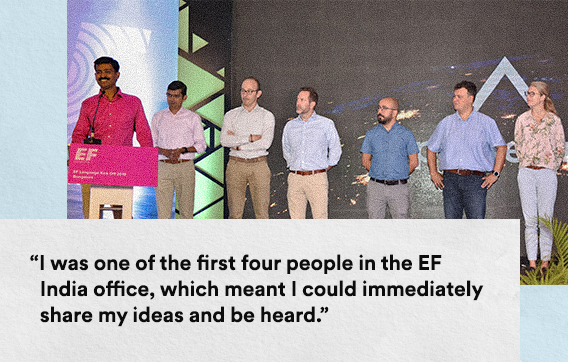 In 2008 the global economy was in shambles. You opted to join EF — an unknown organization within your professional network in India. What motivated this choice?

In the four years leading up to my offer from EF, I had held three different positions at large corporations. These environments were tightly scripted, and I was always following someone else’s plan or process. Every new role that I would get, I knew this would be the case, but I still didn’t like it. The culture never worked for me; it was too hierarchical and had too many processes. At such huge companies, your work is limited to your team or your manager. You can’t really express your ideas beyond what’s already been defined for you. At the end of the day, I was working simply to execute what somebody else said, to follow instructions and stick to the script.

I was looking for a change, but not in terms of work culture because I didn’t believe anything else existed. Most companies work this same way, in my experience. I was looking for a change because it was 2008, the peak of the global recession, and I had been asked to sit idle for awhile at work. I knew I had to look for other opportunities, and when EF presented me with an offer, I was very ready to do something different. 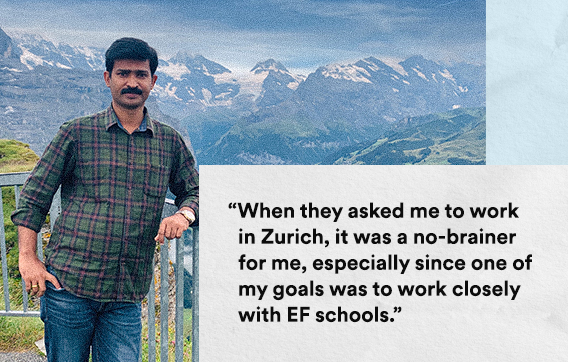 What gave you the courage and perspective to take this risk?

I’m from Kerala, a small state in the south of India. I grew up in a village where my grandfather and mother were both teachers. Together, they taught in my community for over 50 years. Understandably, they wanted me to join in this legacy. Teaching is a highly respected job, so this made sense. Just not for me.

On the other hand, my dad was a big dreamer, always pushing me to envision big things for myself, like seeing the world. Ultimately, he had a strong influence on my willingness to step outside the paths that were expected of me. I think that influence played a part in me being willing to deviate from the norm.

Also, I knew that I had two other offers if things at EF didn’t feel right. It might sound strange, but in India, when you get an offer, it’s normal to have other offers lined up too. So when I started at EF, I had start dates at other companies a few weeks later. My plan was to give EF a try. Go and see what it’s all about, but also have a backup plan in case it wasn’t right for me. With this, it felt like a good choice but not a huge risk.

So you arrived at EF hoping that it would work out but not yet convinced the role was right for you. How did those first few weeks go?

I was one of the first four people in the EF India office, which meant I could immediately share my ideas and be heard. It was strange to me, but I really liked it. In my first week, the CIO traveled to Bangalore to meet with us. It was immediately clear that there was no strict hierarchy preventing me from talking to anyone in the organization about my ideas. This is what I had been looking for — freedom and trust. After this first week, there was no looking back.

As time went on, I knew I had made the right decision because EF gave me a lot of opportunities to see the impact of my work firsthand. I traveled to EF schools in the UK to meet the students that I had previously only known as numbers in the systems I was building. It’s a very different thing to know a student as a number you have to write code around versus a child in a classroom.

For my team and I, on the tech side, if our system works 99 out of 100 times — it’s great, this is success. But if you are in the school printing certificates for 100 students leaving for uni and only 99 students get a certificate for their graduation ceremony because your system had an issue, it’s not a great feeling. Being there in the schools and seeing the significance of my work was entirely different from sitting in Bangalore hearing that 99 out of 100 certificates successfully printed. In Bangalore, it’s natural to feel like 99 out of 100 is success. Onsite with the students, you see that it’s not, and it can always be better. Speaking of your travels, EF eventually asked you to join their Zurich office as a Product Owner. How did this align with your career and life plan?

In Bangalore, I had advanced from a Senior Developer position to Office Manager. It was a small office, and there was no other advancement path for me there. It was clear that EF acknowledged my work over the years, consistently promoting me and valuing my abilities. So when they asked me to work in Zurich, it was a no-brainer for me, especially since one of my goals was to work closely with EF schools. In India, this just wasn’t possible, and travel was complicated and limited due to distance and visas. And on a personal level, my wife had wanted to spend our honeymoon in Zurich, but at the time, we couldn’t make it happen. When I got the offer to move our life to Zurich, she was totally on board!

How do you think this year’s shift to online learning and digital experiences will change your work or change EF in the years to come?

We’re definitely in an online learning boom, and that was felt quite suddenly this spring. When the COVID-19 lockdowns started happening all over the world, my team had to build the system for thousands of EF students to attend class via Zoom. We built this in a week because we had to. We are the world leader in language education, so it was essential for us to give our students the education they expect no matter what. A lot of students and our schools wanted answers to “What happens now?” We were able to provide them quickly and show that as an IT team, we can make a huge difference. We’re not just a supporting department or a backend team — we can actually drive the business.

Right now, parents may feel more comfortable with online learning due to the coronavirus. But I think students will always want to be in-person with other students. I don’t think the online boom is a threat to in-person learning coming back as soon as it’s safe. And for me, I don’t think too deeply about change because it always just comes to me. My expectation is simply that EF will pull me out of my comfort zone yet again.

Megan McHugh is a writer and traveler. Her passions include vegetarian food touring, digging through thrift shops and singing. She has a notebook full of entrepreneurial plans that she loves bouncing off strangers and can often be overhead chatting about [...]