A feat of passion and perseverance: Joe’s EF journey 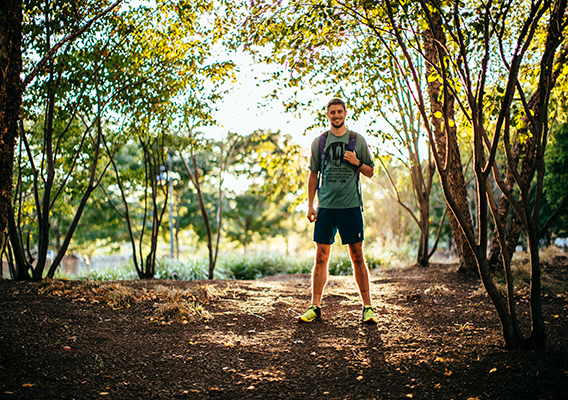 It was a grueling fight to the finish. Buffeted by 70-mile-per-hour winds, rain, and sleet, the only thing that kept Joe fighting until the end was knowing he would see his girlfriend, Kira, and friend, Josh, waiting for him at the top.

For EF Ultimate Break Tour Consultant Joe McConaughy, the final push to Mount Katahdin, the final stop of the 2,189-mile Appalachian Trail, was totally worth it. His ascent to the summit meant that he broke the fastest known time for completing the Appalachian Trail. Completely self-supported, Joe finished all 2,189 miles in just 45 days, 12 hours and 15 minutes.

Joe credits his drive with growing up in a “family of achievers.” “They’re highly ambitious people who told me to embrace challenges and follow my passion,” he said. For Joe, that included running track and cross country at Boston College, eventually winning a prestigious Fulbright Scholarship to study in Austria, where he continued to run through the Alps.

It was during Joe’s time in Austria that he first got wind of EF Education First. He saw a sign for EF on the side of a bus stop, and after his Fulbright ended and he was back in Boston, he realized the EF in Cambridge, MA was the same company as the one he had seen advertised in Austria. A self-proclaimed language junkie, his interests fit right in with EF. “I’ve studied German, Spanish, French, Russian, Italian, Turkish to varying degrees,” Joe explained. “When I’m not at work (or running), that’s what you can find me doing.”

Joe found his way to EF Ultimate Break, which offers fun, affordable travel experiences for anyone 18-29 and looking for adventure. And while he works full-time helping find the perfect trip for travelers, his job hasn’t gotten in the way of being able to follow his dreams. In fact, when Joe told his manager at EF Ultimate Break that he had a goal of breaking the fastest known time record on the Appalachian Trail, she was nothing but supportive. “I mentioned it pretty far in advance, kind of as an idea,” Joe said. “I never expected it would be taken seriously.”

Little did he know that his manager would take Joe’s dream to the President of EF Ultimate Break, who decided that it was such a unique opportunity, Joe couldn’t pass it up. It wasn’t the first time Joe had attempted such a daunting feat—in 2012, he beat the fastest known time for completing the Pacific Crest Trail in honor of his cousin Colin, who passed away from a rare form of Neuroblastoma at the age of two.

In the end, EF Ultimate Break granted Joe a two-month leave of absence to pursue his dream, ready to welcome him back as soon as his mission was complete. Along the way, the EF Ultimate Break team followed Joe’s every move. “They were incredibly supportive,” Joe said. The team tracked Joe’s movements on a construction-paper trail attached to a whiteboard, and celebrated Joe’s return to EF with a huge lumberjack breakfast. “Since getting back, the reaction from EF Ultimate Break, and from everyone in Boston, has been amazing,” he said.

As far as what Joe wishes he knew before coming to EF, his answer is simple: “I wish I knew EF existed!” he laughed. “I still can’t believe a company like this exists.”

Watch the documentary about Joe’s passion for running, “Why Not,” and catch him on his next adventure by following @thestring.bean on Instagram.