The search is over 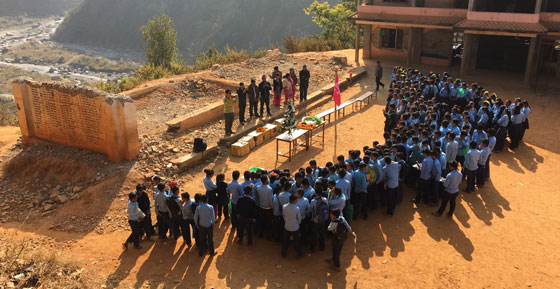 After weeks of site searching, damage assessments and administrative meetings, EF Team Nepal finally narrowed the field to one location: Shree Liti Mahakal Secondary School. Liti Mahakal is located deep in the hills of Dhading district, 5 to 6 hours from Kathmandu, with the last couple of hours spent on a single-width, heavily rutted dirt road. Both of Liti Mahakal’s classroom buildings were severely damaged by the earthquake – apparently due to a new experimental “cost-saving” design – and require complete rebuild. The school serves an economically depressed and isolated community with few financial resources and no donors offering to rebuild the school’s permanent structures.

Unfortunately, this relationship was not meant to be.

Late in the negotiations, Liti Mahakal’s administrators suddenly revealed that a local, well-established NGO was in fact interested in rebuilding the school; it was the same organization that had come up with the original “cost-saving” design! A partnership between EF and the NGO was discussed, but eventually fell apart based on a single issue: the NGO – who apparently planned to rebuild Liti Mahakal with or without EF – would not allow EF to alter their standard design.

Given the choice between building a school that could not withstand another large earthquake, or building earthquake-resilient classrooms for another equally needy school, it was crystal clear: the team would have to select an alternate school. And that school is also located 5 hours from Kathmandu, but in the exact opposite direction: Shree Jalapa Devi Higher Secondary School in Sindhupalchok District.

Jalapa Devi is very similar to Liti Mahakal in terms of student population, terrain, access, and community resources. One of its two classroom buildings has significant wall damage, but the frame remains intact, which means a refurbishment. The other building has already collapsed and would need to be rebuilt from the slab and up. However, unlike Liti Mahakal, Jalapa Devi is truly without external aid: without EF or another donor, the school would have continued using their temporary buildings indefinitely.

So, after a surprising glitch that broadsided the original selection, EF Nepal has finally secured a school. Now comes the real challenge: getting it built…and built well! 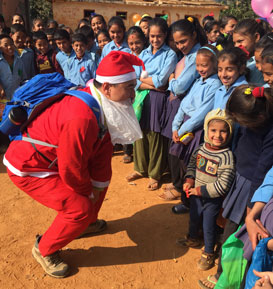 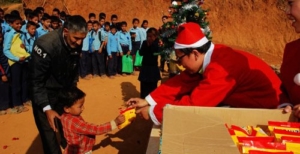