Reflecting on the challenges of rebuilding Nepal 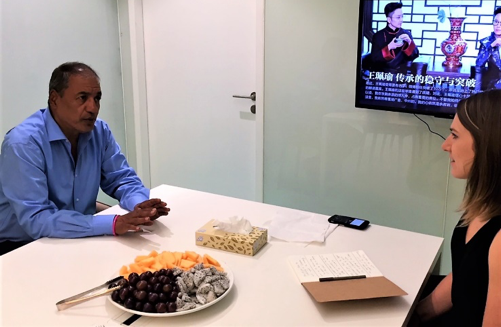 We recently welcomed Rakesh Hamal to the Education First Headquarters in Shanghai. He took a tour of the Headquarters and sat down with us to provide some insight into the project, and his role and involvement in the initiative.

Mr Hamal is one the partners involved in the EF Global Classroom in Nepal and the Chairman of Safa Sunaulo Nepal (SSN). SSN is a Non-Government Organization that operates in Nepal, and has partnered with EF in the rebuilding of Shree Jalapa Devi Higher Secondary School.

What is your involvement in the EF Global Classroom Initiative in Nepal?
I wear two hats; one is where I represent the Social Welfare Council in Nepal. This council is the regulatory body of all the INGOS and NGOS operating in Nepal. I’m also involved in the International Reconstruction Committee and Policy Guideline Committee, which has been involved in the monitoring and guidance of reconstruction following the 2015 earthquake

What have been the main challenges involved in infrastructure policy following the 2015 disaster?
The biggest challenge Nepal faces is the lack of technical knowledge on how to handle post disaster situations. The last earthquake that saw Nepal devastated was in 1934, which resulted in over 10,000 casualties.

In 2015, we had to come up with an approach for restructuring the country’s damaged infrastructure. This was the cause of controversy, for multiple reasons. The main points of contention were related to funding, building codes, land regulation policies, designs and technical knowledge.

How has this project managed to be a success despite these limitations?
For this project specifically, we turned to Japan for the majority of our technical assistance and this created problems of its own. Other international organizations intervened as they believed they had the know-how, even some local organizations got involved.

Working in underdeveloped countries is always difficult. Of course, bureaucracy is a major challenge, it is slow and the malpractice of certain laws is prevalent. I believe EF has done a tremendous job thus far. Taking on a project of this magnitude, right after the disaster, was a difficult and complicated thing to do. EF took quite a lot of initiative and made a great effort to find the school. Nepal had about 14 severely affected districts and EF chose to rebuild in one of the most affected districts of the country, one where the highest casualties occurred.

The donors decide where they would like to build and I appreciate that EF chose to rebuild in one of the most affected areas.

Is this project leading the way with regard to the implementation of new infrastructure and technology?
It took numerous meetings to formulate a solid plan and work with the laws and regulations of the country. Through a lot of brainstorming and hard work we were able to apply to the government. The application part was difficult – there were many layers of approval. Once, EF found a school to rebuild we had to start the government process and the first step of that process was to go through the Central Level Project Implementing Unit. This part of the project was definitely the most time consuming. After that we had to go through the department of Urban Development and Housing. This department approves the designs and plans, which took several months, due to the high volume of buildings awaiting approval. Almost 8,000 schools were damaged, as well as half a million private homes and various other buildings. The lack of expertise and shortage of human resources made it very difficult.

Size wise, Jalapa Devi is a pretty big school – it’s one of the bigger schools that is being rebuilt. EF has also shown great initiative with use and implementation of Japanese earthquake technology. It was one of the only schools to implement this kind of technology at the time.

While the students and community await the rebuilding of the school, what are their solutions to schooling?
Out of the 8,000 destroyed schools, we have only been able to collect the funds to repair and rebuild 4,000 schools. While the construction is underway, students attend Temporary Learning Centres. Everyone in the area is eager to see the school reopen and excited to have a safe and comfortable environment to learn in.

Shree Jalapa Devi Higher Secondary School is expected to open its doors once again in the new year, and hopefully it will continue to be a model for continuous collaboration and development across Nepal. 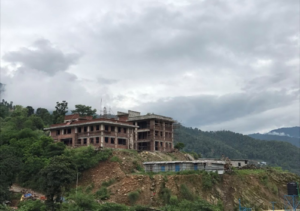