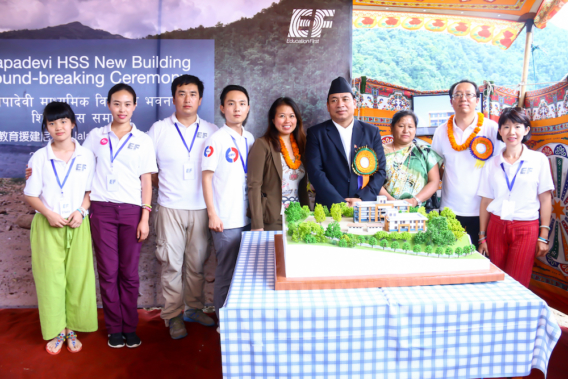 After more than a year of research, planning, and collaboration, the rebuild project of Jalapa Devi Higher Secondary School officially broke ground on a warm Wednesday morning, September 28, 2016.

Preparation for this event was at least a couple of months in the making.  Originally scheduled for July, the groundbreaking ceremony was delayed twice due to poor conditions on the roads leading to the school.  July and August in this region of Nepal are the wettest months in the entire year; torrential rains cause landslides and floods, and regularly wash away roads. While safety was a concern for all attendees, it was the foremost concern for the staff of the ceremony’s guest of honor: the Respected Honorable Vice President of Nepal, Nanda Bahadur Pun. Only when the VP’s cabinet was satisfied with the stability of the road access did they give a green light to the ceremony. 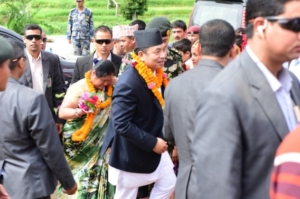 The Respected Honorable Vice President of Nepal, Nanda Bahadur Pun is welcomed to the ceremony.

The final hours leading up to the event were typically frantic: giant tents, banners, staging and lighting were set up on the main school grounds, and food for over 600 people was prepared in one of the temporary classrooms on a nearby hill. School administrators and volunteer students reviewed their event responsibilities, while Nepalese Army personnel checked, double-checked, and rearranged anything they felt could possibly compromise the area’s security. It was all hands on deck until the very early morning hours.

At 7a.m., a security motorcade transporting the Vice President (as well as EF China General Manager and Chief Representative Melissa Lam and representatives from EF’s partners) raced down cleared roads and were greeted several hours later with a warm reception – and plenty of the marigold garlands that are omnipresent in Nepalese rituals – by Jalapa Devi’s principal, teachers and students.

The ceremony began with a traditional dance performance by several students, followed by passionate speeches from the Ministry of Education, former school principals, Ms. Lam, and finally Vice President Pun.  Both the school administration and EF presented ceremonial plaques – locally referred to as “Tokens of Love” – to honor the project’s partners and the Vice President. Then it was time for the actual groundbreaking next to a carved foundation stone that will eventually be imbedded in one of the new buildings. The ceremony officially ended by providing lunch to the school’s most important attendees: the students themselves! 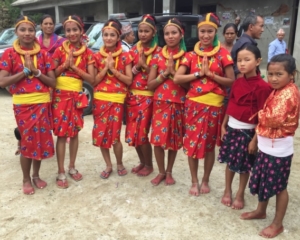 Several student dancers pose for a photo in traditional dress. 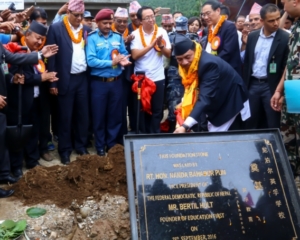 September 28th marked the culmination of months’ of hard work by not just EF Nepal team, but also by their team of partners: Japanese consultancy Yoshizawa Architectural & Structural Design, who contributed their extensive experience in earthquake-resistant construction technology and will engineer the first-ever use of earthquake-resistant geotextiles in Nepal; Nepalese firm Prativa Architects & Associates, who developed the plans and ensured the design reflected local tradition; and charitable organizations Safa Sunaulo Nepal and Shanghai Charity Foundation, who provided administrative support through their respective networks.

With their help, the groundbreaking is the very beginning of a construction project that will raise two new buildings on the original site and transform Jalapa Devi HSS into the largest school in the district.  When completed, the eagerly-awaited campus will have enough space for 1,200 students and teachers: one main building of 12 standard classrooms, and one functional teaching building that will include classrooms, dining rooms, reading rooms, science laboratories and offices.

Congratulations to all, and to an auspicious start for the new campus!