The EF Academy experience as told by Robby Ngai 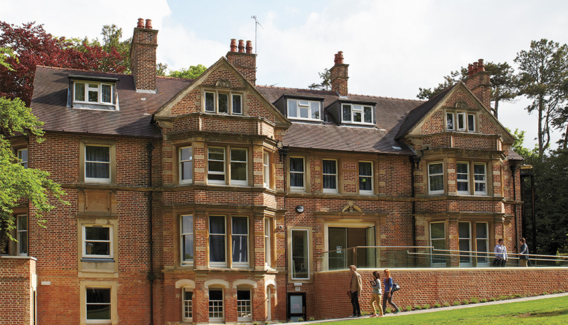 Walk us through your decision to study abroad

It’s a neat experience to be in a different corner of the world that my family doesn’t live in. Growing up in Toronto, EF New York wouldn’t have been much of a culture shock to me, and now that I’ve been here for over a year, I know that my perspective would not be as broadened if I’d stayed in that part of the world. As well, EF New York students tend to be a bit younger, so the school felt that EF Oxford was a better fit.

What do you enjoy about the A-Level program?

It feels more university-like. There is a lot of independent learning and some of the topics are really advanced and you sometimes question if it is actually a high school curriculum. Lessons go very in-depth and that makes you grasp the subject as a whole. For example, what I’ve learned in biology has helped me understand things like nutrition in-depth, instead of only learning things at a surface level.

Why is psychology your favorite course?

What is it like learning and living with people from all around the world?

I think it makes you a kinder person and a more tolerable person. My roommate prays different times during the day and I’ve learned to be respectful and give him space. I’ve realized that some friends can’t eat pork and/or that they only eat halal meat – having this awareness that something as simple as food isn’t as straightforward for everyone and the awareness that even those who you share a room with may have vastly different beliefs to yours is important to learn.

What do you like to do in Oxford in your spare time?

I’ve loved going for Friday karaoke nights in the city or ice skating occasionally. There’s a variety of ethnic food around Oxford to enjoy as well; my Italian friend and I often find ourselves at a Korean or Japanese restaurant, and occasionally we’ll have some food from our own countries.

Being Oxford, the city has some powerful events you can be a part of, like Oxford University lectures. I attended one about vaccinations and new ways of storing vaccines – they were developing a special container that keeps the vaccines cold and sterile, which they would need in Africa when the temperatures get so hot. Recently, we visited University College London for a Maths’ Enrichment Day – we heard from students who graduated from Cambridge University and they taught us about aerospace engineering, fractals, and even the “Enigma machine”, which was used in WWII.

Why would you recommend studying at EF Academy Oxford?

I think the students here are very mature for their age. They’re very independent, yet socially acute and take academia seriously. I think it’s an environment that promotes learning, with opportunities offered by such an age-old university just a short bus ride away. The location is quaint and peaceful, even though it can rain quite a bit in the winter months.

How do you feel EF Academy is helping you explore your options for universities and programs?

I really appreciate what my counselors, Mark and Cy, have done for me. Mark is known for having a critical eye for essays and personal statements ­and Cy is the ultimate worker – he works so hard for ­the students! He was my rock and number one supporter for my university applications. He was the one that tracked down my teachers and helped me get my written recommendations, and the one that gave me confidence and the drive to get those applications done.

After all, as a university counselor, economics teacher, husband, and father, I’m sure it was nothing compared to the commitments he is faced with on a day-to-day basis. Both of my counselors always have really helpful seminars or meetings during lunch about things like applying to U.S. universities or Oxbridge, or even as a medical student. (Editor’s note: In 2017, Robby applied to schools such as UCLA, UC Berkeley, Brown, Yale, and Northwestern)

What is an accomplishment that you are proud of?

I was really surprised when I heard that I won gold in the Senior UK Math Challenge. I used to have a fervent want to pursue physics, and Maths and Physics provided a steady supply of anxiousness to me. But that might have been because I didn’t really put much pressure on myself to do well. I did it just for fun and I thought I’d be lucky to even get bronze, so with that expectation, I could think more coherently during the challenge. (Before that, I don’t think I’d ever won gold in a Maths challenge before.)

What is one goal you’d like to achieve by the end of your high school education?

I want to get better at enjoying life more while working hard towards further self-development. Granted, I’m not really a glass-half-empty kind of person even right now, but I feel like living life for the big moments as opposed to obsessing over small details is really a philosophy that I want to embrace.

Robby graduated from EF Academy Oxford in 2017. He was offered places at Berkeley, New York University (NYU) and University of California – Los Angeles (UCLA). You can now find him studying Psychology at UCLA. Originally published November 1, 2017.