A lecture at the University of Oxford’s Institute of Mathematics 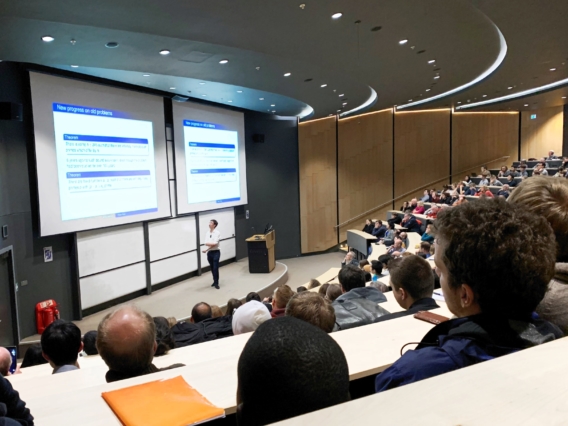 In this article, I am going to talk about a fascinating lecture that I attended on Tuesday, February 5. The lecture was at the Mathematical Institute of the University of Oxford and was organized by Oxford Mathematics Public Lectures. The lecturer was James Maynard, and the topic that he discussed was prime numbers.

I was really surprised when he got on the stage because of his very young age, only thirty years old, that seems young compared to many other lecturers and mathematicians. He studied at the University of Cambridge, did his PhD at the University of Oxford and won many awards for his research and studies. His primary research focus (that he talked about during the lecture) is prime numbers and number theorem. He explained that prime numbers are the building blocks of mathematics and that, despite what many think, they are useful in our everyday lives. In fact, prime numbers are at the base of our mobile phones and laptops, and they are used in the encrypting of our personal data in applications like Amazon and WhatsApp.

He then went into some very interesting challenges and problems that are still unresolved and that many mathematicians, including him, are working on. Another thing that he talked about was his research in finding patterns in prime numbers. To this day, mathematicians are still struggling to find consistent patterns, but they are also developing and working on their theories. I really enjoyed the lecture because I am really interested in mathematics and the number theorem was something that I was already reading about before. The way that Maynard explained the topic was really easy to understand and follow, unlike other lectures which can be a bit boring sometimes. It wasn’t the first lecture that I’ve attended, but it was the first one about mathematics, and I can say that I really enjoyed it and will attend more for sure.

Interested in attending high school in the historic city of Oxford?