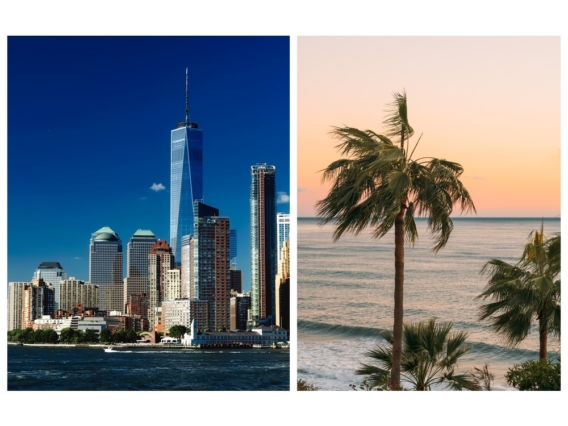 The United States of America is a vast country, filled with many different landscapes and cultures. Because of all the variance across the different regions, it can be helpful to break down some locations and learn more about what really makes them so different. The East coast and West coast are extremely different places when it comes to lifestyles, and each cater to different types of people.

One of the most major comparisons between the two coasts is their cities, namely New York and Los Angeles. Despite both having internationally-recognized acronyms, these places could not be more different. As with many large cities on the East Coast, New York is a very compact place.

While the island of Manhattan is large, it pales in comparison to the vastness of Los Angeles. In New York, you can take the subway from one end of the city to the other (or even to Brooklyn) in around an hour, while in Los Angeles, you could spend hours in the car (and the famous LA traffic) to cross the city.

Many East coast cities (especially New York) are known for their fast-paced approaches to life. People are often hurrying from place to place, walking quickly to catch the subway or the bus, trying to accomplish everything on their to-do lists. While this lifestyle can sometimes be challenging to adjust to, it is exhilarating to be surrounded by the hustle and bustle of so many people going places and doing things.

If the “go-go-go” pace of the East Coast sounds overwhelming, the West coast may be a perfect fit. On the West coast, people are a lot more laid-back. Nature and health are often a huge focus there, so it should come as no surprise that they try to stay very zen and get out to their favorite parks and locations. Whether you chalk it up to the sunshine and palm trees (or to the neverending traffic), West coast people are rarely in a rush.

It’s often said that the East coast has more evident European roots. As Europeans first landed in the East and began building their colonies, much of this coast’s architecture and its smaller towns bear striking resemblance to the European homes of those who built it. The architecture is like a walk through the history books. Some of the most historic sites include the Liberty Bell in Philadelphia, the Lincoln Memorial and White House in Washington, D.C., and Colonial Williamsburg in Virginia. In New York alone, you can learn about immigration at Ellis Island and see the influences of so many cultures all around. Really, everywhere you look you can spot a building or place that has historical significance.

The West coast’s history is diverse and every bit as boisterous as one might imagine. If we look back into its history, it kicks off with the American frontier period, the hardships of the Oregon Trail, the “cowboy life” of the Wild West and the country-wide frenzy caused by the Gold Rush. Mix in a few wars over land and religious freedoms, and you’ve got the powder keg that lead to some defining moments in American history. But it wasn’t all outlaws, cowboys, and violence. The early West helped move the nation forward into new ideas and identities. It could be argued that an innovative spirit, quest for tranquility, respect for nature, and love of diverse cultures are all positive outcomes we see today from the West’s wild past.

New York is a pivotal space for culture, especially in the forms of music, theater, and fashion. People come from all over the world to participate in and enjoy Broadway productions or attend performances by the city’s orchestras and ballets. In addition, New York Fashion Week happens twice a year, where designers, models, and other creative fashionistas descend upon the city to unveil new lines for the upcoming seasons.

When you look at big-budget filmmaking and TV production in the US, New York is a key player but Hollywood is known as the place for TV/movie stars. In Los Angeles, you can even take tours around the city to see the homes of famous actors, and visit filming locations of various movies. The Pacific Northwest helped kick off the country’s beloved coffeehouse culture. Most notably, with the world-famous Starbucks, founded in Seattle by University of San Francisco grads in the ’70s. 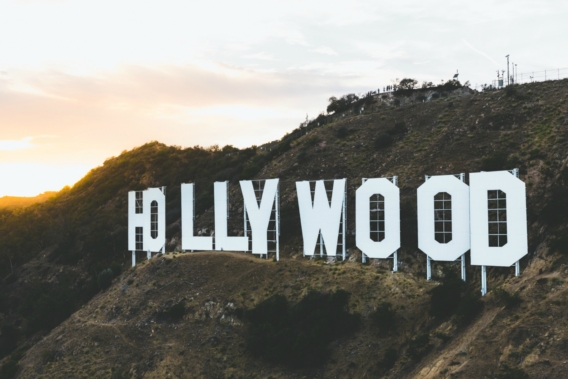 The Atlantic and Pacific oceans bring very contrasting climates to the two coasts. In New York, long, snowy winters are contrasted by hot summers. Most of the East coast experiences all four seasons, while the West coast has a very different climate. In Southern California, it is sunny and warm all year round with the northern part being colder and foggier. In the Pacific Northwest (basically everything north of San Francisco), winter comes in the form of rain and mist with the occasional snowstorm.

The great thing about the United States is that, between the coasts, you can find basically any type of landscape you could want! There are beautiful sandy beaches, vast deserts, snowy mountain ranges, and lush green forests. The National Parks on each coast are extraordinary, and if you enjoy hiking, skiing, or swimming, you’ll find adventures around every corner. The East coast is known for the Appalachian mountains, which stretch all the way up the coast to Maine. In California, the Sierra Nevada mountains are a great place to hike, too – but you can also surf or hike along the beautiful rocky coastline at places like Big Sur.

Live and learn in the US Join EF Academy