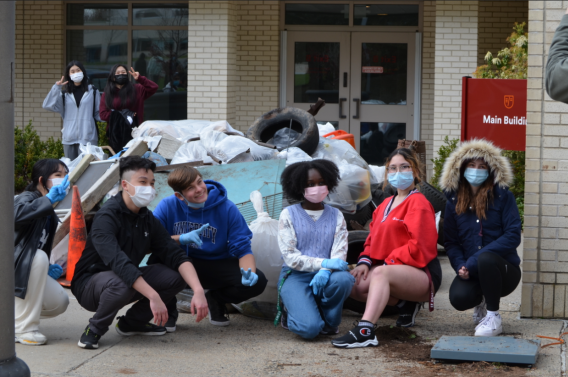 As the discussion of greenhouse gases and global heating continues to be a prevalent, daily conversation, EF Academy New York has joined the fight against the climate crisis and reduces Westchester’s carbon footprint through the immersion of their global, student leaders to real-word problems. EF Academy’s student profile encompasses the qualities of learner, leader, scholar and global citizen, which they use to expose their students to real-life scenarios and teach them how to overcome challenges. EF Academy New York takes their classroom outside to battle these circumstances by instituting activities such as campus and highway cleanups, gardening, composting, and farming.

On Earth Day, EF Academy accomplished a tremendous victory during their campus-wide cleanup. Students spent the second-half of their school day navigating the campus’ 97-acres and collecting garbage that has built up over 15+ years from the previous two owners of the property. The school encouraged teamwork and separated the students into groups to provoke some friendly competition. After less than two hours, the student body, faculty and staff collected 2,864.5 lbs – nearly 1.5 tons – of garbage and took it to a facility to be properly disposed of. Academy will be facilitating another cleanup in May on their adopted highway, Columbus Avenue in Thornwood, NY, where they are anticipating another triumphant day of saving the planet.

In addition to cleanups, the school leads planet-protecting initiatives in their campus garden to help reduce New York’s carbon footprint. The school has eight long planters in the West Quad, where they grow and farm fruits, vegetables, herbs and more. In their efforts to reuse and recycle, the students have placed “No Waste” bins in their dining hall, for leftover food to be deposited and eventually used as compost in the garden. In the coming months, the school will be building a chicken coop and have the ability to collect and use farm-grown eggs in the dining hall. The school also plants various vegetation around campus. “We take pride in caring for our campus,” says Luca Wallisch, a senior at EF Academy, “The school is always giving us opportunities to work hands-on, such as planting a Senior Tree every year. Not only is it a lasting memory for the seniors, but also a terrific opportunity to help the planet.”

EF Academy is consistently making changes to their everyday lifestyles that will ultimately lead to a healthier planet – such as placing filtered water stations throughout their buildings, using less plastic utensils in the dining hall and leaving recycling/donation bins outside dorm halls. “We’ve come a long way,” shares Jason Kirschner, Head of International Admissions and 7-year long employee. “Activities like these are epitomes of our mission, ‘opening the world through education,’ and I’m proud to have been here long enough to see how our campus initiatives have grown.” The school is anticipating a successful year next fall and is looking forward to devising more ways to utilize their strong green thumb and continuing reducing their carbon footprint.