English and the economy 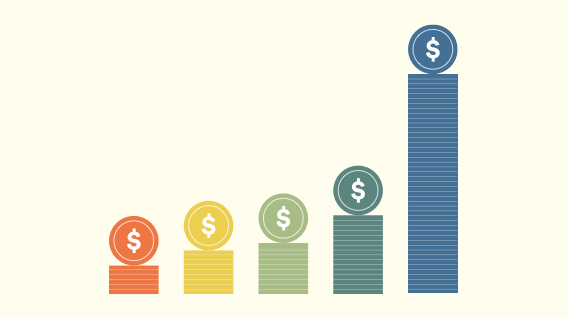 A lingua franca lowers transaction costs across borders; the more widely English is adopted, the more savings it generates. Although there is evidence that the pace of globalization is slowing, international trade is a significant portion of the world economy, with exports making up around 20% of the world’s economic output. We consistently find a correlation between ease of doing business and a country’s English proficiency, as well as speaking English and a range of logistics-related indicators.

The latest edition of the EF EPI, English Proficiency Index, found that for economies around the world, higher English proficiency correlates with higher gross domestic product, higher net income, and higher productivity. To be clear, there’s no evidence that English proficiency drives this economic success. But the complex relationship between language skills and economic growth – with greater wealth facilitating more English training, and English skills helping economies stay competitive – highlights the role that English can play in broader schemes for economic growth. 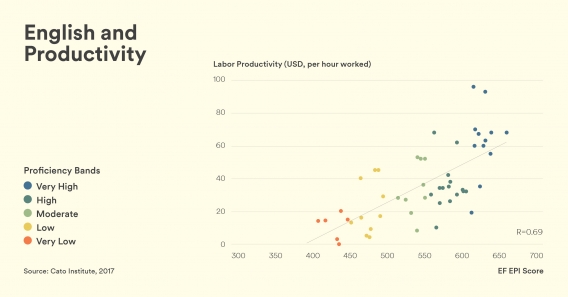 In developing countries, the transition to a knowledge-based economy requires building both infrastructure and a skilled workforce that is able to offer services internationally. In the past 30 years, many emerging economies closed the gap with richer countries thanks to manufacturing. As those opportunities dry up, they will need to focus more on education, for both children and adults, if they are to tap into international trading opportunities and develop service-sector industries. We find a correlation between a country’s level of human capital development and its English proficiency. 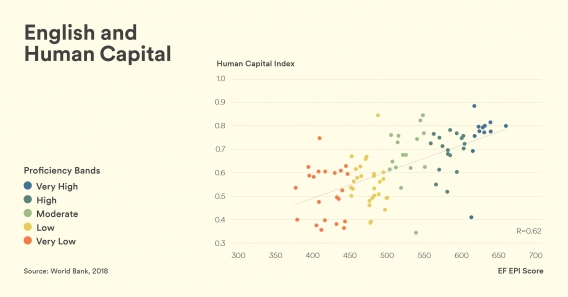 Services represent a growing share of global economic activity, but they are more difficult to export than goods. iPhones can be shipped anywhere; accountants cannot. There is a correlation between English proficiency and a country’s service exports as well as the value-added per worker in services. As the complexity and sophistication of economic exchange increases, so does the demand for linguistic competencies. A growing number of MBA programs demand fluency in English and a second, sometimes third, language.

Trust me, I speak English

Speaking the same language as a trading partner is not only a technical necessity but also a basis for building trust. That trust is reflected in the data: economist Pankaj Ghemawat estimates that countries that share a language trade 42% more with each other than they would if they did not share a language. Although technology and AI will increasingly assist in routine translation, we are a long way from a language engine that can understand the cultural nuances humans routinely navigate in everyday communication.
Far from the English-only business environment decried by linguistic protectionists, today’s multinational firms engage with a diverse linguistic landscape. True, there is a drive to use English as the fastest and cheapest mode of communication between speakers of different languages, but investment in other languages is high, too. According to national agencies for language promotion, at least 150 million people worldwide are currently studying French, Spanish, or Chinese as foreign languages. There is enormous trust to be gained by learning the native languages of your partners.

We have found a consistently positive correlation between English proficiency and a range of indicators of human and economic development, including adjusted net income per capita. 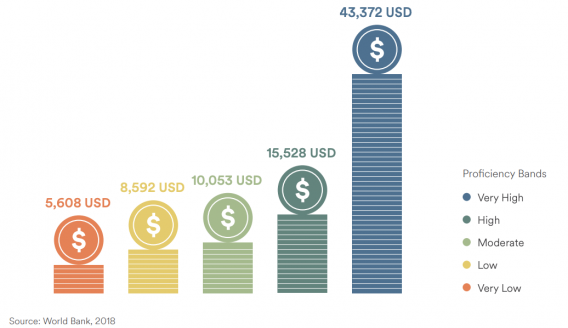 We bring insights and best practice guidelines from our team of expert language training consultants, researchers and our clients. [...]